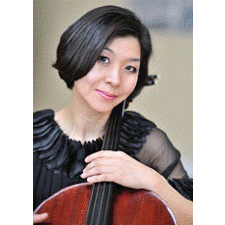 WonHee Kim
BM and MM New England Conservatory. Kim is an active performer and teacher in the Baltimore-Washington area. She has been a guest performer in the Candlelight Chamber Music Society, Sunday at Three Concert Series in Baltimore. As a chamber player, Kim performs regularly for the NEC Alumni Chamber Concert Series in Washington, DC. In addition to the degrees she earned at New England Conservatory, she has also studied at the Sweelinck Conservatory in Amsterdam, Holland and the Seoul National University in Seoul, Korea. Currently, Kim is a member of the Artistic Council of the Inpass Music Competition in VA, MD division, and she has been serving as a Maryland All-State Orchestra adjudicator. She is also on the faculty of the Interharmony International Music Festival in Schwarzwald, Germany, as well as a faculty member of the Maryland Summer Music Festival. Her principal teachers have been Min Ja Hyun, Dmitri Ferschtmann and Laurence Lesser.