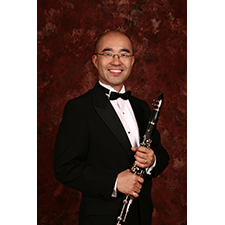 Jihoon Chang
Clarinetist Jihoon Chang was born in Seoul, Korea and immigrated to the United States with his family and settled in St. Louis metropolitan area. He earned his bachelors degree in music performance from the University of Illinois in Urbana-Champaign, where he received the Theodore Presser and A.A. Harding Awards. His master's degree was earned from the Eastman School of Music in Rochester, NY, where he received a Performer's Certificate. His doctorate degree was completed at the University of Maryland in College Park.

He keeps an active performing schedule with Christian Art Mission, Con Brio, Washington Chamber Orchestra, Omega Recording Studios, and "The President's Own" United States Marine Band, located in Washington, D.C., where is frequently involved as a chamber musician, clinician, and soloist, as he was the featured soloist on their extensive 7-week tour in 2004. His performances abroad included England, Germany, Japan, Korea, and Switzerland with various organizations.

Currently, he is the clarinet professor at Howard University in Washington, D.C. Previously, he has been on the faculty at the Academy of Music in Gaithersburg, MD and Camp Encore/Coda in Sweden, ME, as well as the director of the children's orchestra at United Methodist Church in Rochester, NY and the choir director at First Christian Presbyterian Church in Beltsville, MD.