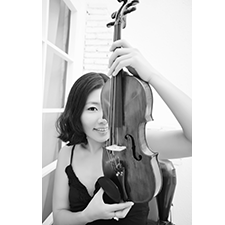 Yoojin Baik
​Born in South Korea into a Christian family with her father serving as a Pastor, she was exposed to music early, and began violin lessons and music theory lectures at the age of four in a music kindergarten established by a famous Korean composer "Woonyoung Na". She studied at Shenyang Conservatory, (music school) in China, the Tchaikovsky Conservatory, Kiev, Ukraine. and the Hochschule fuer Musik "Hanns Eisler" Berlin, (Bachelor&Master) Germany. She was awarded the final degree Konzertexamen (Doctor of Music) in Hochschule Fuer Musik Detmold, Germany with the Highest Honors and was selected to be the Soloist for the graduation ceremony. In her broad international experience, she has appeared as a soloist at Shenyang Concert Hall, China, the Detmold Concert House, the Weimar fest Hall, the Maanheim Ernst-Toch-Hall, the Berlin town Hall. She also appeared at the Schleswig-Holstrein Music festival in Luebeck, Germany. She was a soloist at the invitation of the Korean Embassy in Kiev, Ukraine and at the invitation the German Embassy in the US. Ms Baik was a Concertmaster for the Detmold Chamber Orchestra and in the Detmold Summer Academy Orchestra, in Germany and was first violin at the Bielefeld Philharmonic. While studying in Hans Eisler Berlin, she participated in workshops with world famous Conductors Seiji Ozawa, Zubin Mehta, and Simon Rattle, performed in Berlin Philharmonie Hall. She has maintained her interest in Chamber music and has a Master in Chamber music with the Auryn String Quartet with highest honors. She had master classes with well-known violinists Midori, Arnold Steinhardt, (first violin of the Guarneri Quartet) and Igor Ozim among others. While she was a member of the Young German Philharmonic, she was selected as one of the musicians for an American concert tour and performed in San Francisco with the Berkeley Symphony under conductor Kent Nagano. She is currently performing in many churches around Washington, DC. She plays a violin made by Howard Needham in 2011, which is modeled after a violin by Antonio Stradivari.