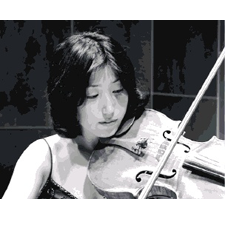 SungAh Min
Sung-Ah Min earned her Doctor of Musical Arts in viola performance from the University of Maryland at College Park where she studied with Daniel Foster of the National Symphony and Michael Tree of the Guarneri String Quartet. She earned a Masters degree from Boston's New England Conservatory of Music and a Bachelor's from Ewha Women's University in Korea. As an accomplished violist she has performed in numerous solo recitals and at festivals such as National Orchestra Institute, the Bowdoin Summer Festival in Maine, Russia's Krasnoyarsk Music Festival, and the North Carolina School of the Arts Festival. She has appeared in various chamber music concerts including performances at the Kennedy Center Terrace Theater and Millennium stage, the Sumner museum, and the Blair House, the President's Guest House. She was a winner of Montpelier Cultural Arts Center Recital Series Competition in 2005. She was also a winner of the Rising Starts Concert Series Competition and was chosen as a recitalist for Concerts at the Alden which was supported by Arts Council of Fairfax County, Virginia. Dr. Min brings over fifteen years of professional teaching experience in violin and viola, and loves working with students of all ages and abilities. She served as a conductor of the Global Mission Church Youth Orchestra for five years, and also taught at the D.C. Youth Orchestra. Since 2006 she has been a music faculty at The Center of Arts of the Holton-Arms School in Bethesda, Maryland, where she practices customized teaching methods tailored to each student's individual needs.