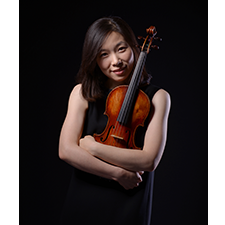 As an accomplished violinist and chamber musician, Dr. Kim has given numerous solo and chamber recitals, and concerto and orchestra concerts throughout the U. S., Canada, Korea, Germany, and Italy in venues such as Carnegie Hall in New York City, Symphony Hall in Boston, the Sejong Center for the Performing Arts in Seoul, and the Old City Hall in Leipzig. Prizes awarded to Dr. Kim includes the First and the Silver medal prizes at the International Chamber Music Ensemble Competition in New York, the Most Distinguished Musicians Award and Brahms Award at IBLA International Competition in Italy, prestigious Tourjee Alumni Award at the New England Conservatory in Boston where her name remains today on the Tourjee Alumni Award plaque, and other scholarships and prizes as well.

In 1992, Dr. Kim sustained an injury to her left hand. This inspired her to develop groundbreaking performance methods using multi-media. She created unique performances called El Bara Art (Hebrew for "God creates"), which includes "The Creation of the World", "The Wanderer", and "Return to HIM", complex multi-media pieces encompassing violin performance, recorded narrations, acting, sound effects, mime, and collage art. As a pioneer of multi-media performance, starting in 1995, she continues perform at churches in the Unites States and Korea.

Dr. Kim received Bachelor, Master (with a Music Education Certificate), and Graduate Diploma degrees in violin performance from the prestigious New England Conservatory of Music, with renowned soloists Michele Auclair and James Buswell, and a doctorate degree from Boston University, where she was a teaching assistant to revered performer and teacher, Prof. Roman Totenberg.