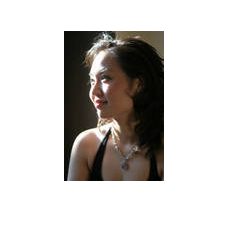 Harmony Yang
Harmony Yang of Buffalo, Ny, was raised in Hsinchu, Taiwan and holds her Bachelor's degree in piano performance from McGill University, where she graduated with an outstanding achievement in piano and placed first in the piano area of the McGill University Classical Concerto Competition. Yang then received her Master's degree in piano performance from the College-Conservatory of Music, where she received a graduate assistantship in vocal-accompanying. In 2009, she was selected to give a recital at the Music Form in Taipei, Taiwan, sponsored by the Executive Yuan and the Council of Cultural Affairs, and invited to perform the Grieg Piano Concerto with the Aikuang Sun Taipei Philharmonic. Recently, in 2010, Yang placed 2nd in the University of Maryland Symphony Orchestra Competition. Currently, Yang is a doctoral student studying with Professor Rita Sloan. In addition, she is also an adjunct instructor at the Bullis School, a church organist, Sunday school teacher, and sermon translator at the Chesterbrook Taiwanese Presbyterian Church. She is honored to be part of the New Life Foundation.