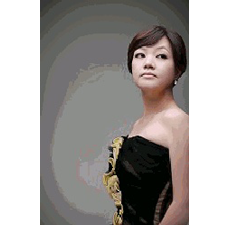 Eunae Han
Pianist Eunae Han performs throughout the United States and abroad collaborating with renowned vocalists, solo instrumentalists and chamber musicians in every genre of music. Dr. Han received her Doctor of Musical Arts from the University of Maryland at College Park, studying under Rita Sloan, who founded and directs the Collaborative Piano Program at the Aspen Music Festival. A First Prize recipient in the University of Maryland's Ulrich Competition, Dr. Han was invited to perform in the "Happy Birthday Mozart" concert at the University's Clarice Smith Performing Arts Center, where she received a rave review from the Washington Post for playing the Overture from Mozart's "The Impressario" with the "brilliance and color" of an actual orchestra. She has extensive experience playing for large choirs, performing oratorios and major choral pieces such as the Verdi Requiem, Bach's St. Matthew Passion, and Handel's Messiah at the Kennedy Center in Washington, D.C. Dr. Han also participated in "Songfest", a summer music festival held in Malibu, California, where, under the tutelage of Martin Katz, she premiered pieces by distinguished modern composers including Jake Haggie and John Harbison. Dr Han has been the official accompanist for the National Association of Teachers of Singing (NATS) Competition, participated as a voice coach for the University of Maryland Opera Studio, recorded Brahms Liebeslieder-Waltzer with the Maryland Chamber Singers, and received an award from International Music Eisteddfod at Liangolleu. In Korea, Dr. Han was a lecturer at the Seoul National University's Opera Studio and the accompanist at the Yoido Full Gospel Church and the Kukmin Daily News Ensemble. She has recently returned from a performing tour of Korea and China with violinist Jihae Park with whom she recorded a CD while in Seoul.